"Marine Management is All at Sea" Japan Times 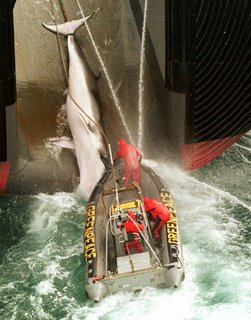 NOTE: An excellent article on Japan's obsession with whaling.

Marine Management Is All at Sea

By Stephen Hesse, for the Japan Times

Our oceans and seas are in deep trouble, and if the Japanese government is to be believed, part of the blame rests with the whales. This is nonsense, of course. The degradation and resource depletion that threaten marine ecosystems worldwide are solely due to human activity.

Still, Japan has struggled for decades to end an International Whaling Commission moratorium on whaling that went into force in 1986, and it is difficult not to sympathize with their frustration, if not with their cause.

It's not that Japan can't kill whales. For years they have been harpooning hundreds of minke whales each year as part of a "scientific research" program carried out in the South Pacific and Southern Ocean, and the number killed is increasing steadily. In its own coastal waters, too, Japanese kill thousands of porpoises and dolphins annually.

But Japan does not need more whales because people are clamoring for steaks and chunks of fried blubber. These days there is not even enough demand to finish off the small mountain of whale meat that is processed each year. Japan has an embarrassing surplus when it comes to whale carcasses.

So why is the Japanese government still so eager to slaughter?

For years the argument was cultural, that whales are a unique part of Japan's fishing and dietary traditions. That seemed reasonable to many observers, but Japanese mariners still preferred catching more profitable fish, and consumers continued to prefer anything but whale.

Government spokespeople then began touting whale meat as a solution to feeding the world's starving masses. That argument, too, seemed reasonable -- but rather disingenuous. After all, Japan had spent years criticizing the cultural imperialism of anti-whaling nations that did not accept the unique role whales play in Japanese culture. Now, the same government was suggesting that non-whale eaters change their own diets.

Most recently, Japanese delegates to the IWC have been preaching that whales eat far too many fish and threaten the food security of coastal nations. In short, whales are eating our fish!

The solution? Kill the whales and there will be more fish for human consumption.

Fortunately no amount of hubris can change the fact that such simple manipulation of the planet's ecosystems is impossible.

Myriad, constantly evolving interdependencies between plants, animals and natural systems form complex ecosystems that are the foundation of human survival, providing food, fuel, pharmaceuticals and material for clothing and shelter -- the very backbone of our economic system. If marine and terrestrial ecosystems collapse, so too will the economic house of cards we have built upon them.

Yes, there is trouble on the high seas, but the whales are not the problem; they are simply another species, like the tuna, swordfish, salmon and sharks that are falling victim to human ignorance and rapacious consumption.

Even as we recognize that oceans are perhaps our best and last resort for food sustenance, we continue to dump our wastes into them, including industrial and agricultural chemicals, oil waste and petroleum products, heavy metals and radioactive materials.

Incredibly, these are the same waters from which we pull much of the fish and shellfish we eat. Almost 20 percent of the animal protein consumed worldwide comes from seafood. Ocean fisheries are some of the most important resources for food security, and yet we are undermining their survival.

Earlier this month, the United Nations Environment Program (UNEP) and the World Conservation Union (IUCN), an international organization headquartered in Gland, Switzerland that cooperates with 81 nations, 120 government agencies, 800 NGOs and experts in 181 countries, released a report that highlights the Dr. Jekyll and Mr. Hyde nature of our relationship with the planet's oceans.

"The conservation and sustainable use of the vulnerable ecosystems and biodiversity in deep waters and high seas are among the most critical oceans issues and environmental challenges today. Immediate impacts and threats, such as those posed by fishing, have to be reduced urgently. Activities that generate long-lasting pollution, alter climate, disrupt oceanic circulation regimes and acidify ocean waters have to be addressed, while we still can," warns the report.

Kristina M. Gjerde, High Seas Policy Adviser to IUCN's Global Marine Program, authored the report, titled "Ecosystems and Biodiversity in Deep Waters and High Seas." Readers interested in marine policy management can view it on the Web (see addresses below). But even for those interested in just knowing more about our oceans, the report contains an array of intriguing information about what goes on in the dark depths of our deep waters and high seas.

Here, for example, are some morsels to chew on next time you order chu toro (fatty tuna) and the sushi chef tells you they've run out:

"In the last 42 years, capture of wild marine fish for human consumption increased from 20 million tons to 84.5 million tons," states the report.

In addition, "52 percent of global fish stocks are fully exploited," while "overexploited and depleted species have increased from about 10 percent in the mid 1970s to 24 percent in 2002," according to Gjerde.
Are you a fan of shark fin soup? You might find it less palatable if you knew that each year 100 million sharks and related species are caught, and many thrown back into the sea finless. Unable to swim, they are left to flounder and die.

In short, we are taking more and more and leaving less and less. Over 75 percent of fish populations are fully or overexploited, and the stocks of large fish with high commercial value, such as tuna, cod and swordfish, have declined as much as 90 percent in the past 100 years.
Meanwhile, the world's population has climbed to more than 6.2 billion and demand for marine resources continues to grow.

To feed these billions there are now as many as 3.5 million fishing boats plying the world's oceans, and "1 percent of those are classified as large, industrial vessels, which have the capacity to take around 60 percent of all the fish caught globally," states the report.

How much of the global catch does Japan consume? According to a Bloomberg story by Yasumasa Song that appeared earlier this month in The Japan Times, looking at tuna alone, Japan accounts for about 630,000 tons annually -- one third of the world's total consumption.

Unfortunately, waste is also rampant in the fishing industry. According to the IUCN-UNEP report, global by-catch (marine species that are caught then thrown back dead or dying because they are not commercially valued) amounts to 20 million tons a year, or approximately 25 percent of all the fish caught worldwide.
Abuses, too, prevail. Illegal, unreported and unregulated (IUU) catches worldwide total between $ 4.9 billion and $ 9.5 billion. So even if most fishers do their best to conserve fish stocks, others are catching and selling fish illegally, undermining essential conservation efforts.

Gjerde notes that 90 percent of our oceans are unexplored, and only about 0.0001 percent of the deep seafloor has been subject to biological investigations. Nevertheless, human impacts can be seen shore to shore across the high seas:

Over 46,000 pieces of plastic litter are floating on every sq. mile (2.56 sq. km) of ocean. In the central Pacific, there are up to 6 pounds (2.72 kg) of marine litter to every pound (0.45 kg) of plankton. Plastic waste kills up to 1 million seabirds, 100,000 sea mammals and countless fish each year, says the report. That's not to mention the millions of tons of human sewage and toxic waste that make their way into our rivers, bays and majestic oceans.

So what can we do to restock, conserve and sustainably exploit the unique resources hidden beneath our seas?

Gjerde calls for "integrated oceans management based on 'ecological boundaries' rather than political ones." She also suggests greater protection for vulnerable species, such as deep-sea fish, and for biologically and ecologically significant ecosystems.

For those wondering how difficult this might be, imagine China, Japan and Korea sitting down and agreeing to manage their shared ocean boundaries cooperatively, the same waters where patrol boats now face off. Or imagine Japan volunteering to cut its consumption of tuna by half in order to help bluefin and yellowtail stocks rebound.

There is too much wealth beneath the waves for nations to cooperate willingly. It is likely to take more crashing fish stocks, more lost coral and more toxic spills before countries worldwide awaken to the critical challenges that face us and our oceans.

And even if we do rise to the challenge, there is no guarantee that we will respond in time. After all, if the world's greatest marine consumer, Japan, still seeks to lay partial blame for the state of our oceans on whales, what hope is there for rational and informed policymaking anytime soon?

Posted by Jeff Wefferson at 7:04 PM