Al Gore and Some Inconvenient Truths about "global warming" 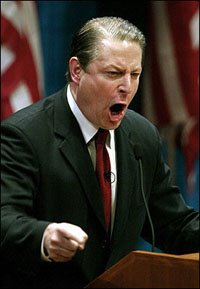 Al Gore and some inconvenient truths about global warming

"...all scientists agree that we're in a period of increased solar activity. The sun, of course, provides all of the heat for earth except the insignificant amount generated by humans. The heat from the sun has increased over the past 100 years and especially over the past 20 years."

"THOSE EVIL REPUBLICANS ARE DESTROYING THE SOLAR SYSTEM!" http://www.mcculloughsite.net/stingray/2006/06/13/al-gore-and-some-inconvenient-truths-about-global-warming.php

Global warming has become a big issue over the past few months with the release of Al Gore's idiotic movie, An Inconvenient Truth. Just two days ago, as a matter of fact, Bill Clinton blamed the increasing number of hurricanes on “Republican policies.” While the press is fawning over the movie and Gore, they have once again neglected — or refused — to do their research. It turns out there are quite a few inconvenient truths for Al Gore and his movie.

History is overwhelmingly inconvenient for Gore. The earth's temperature, CO2 levels, and other environmental conditions are well within the norm for the past 1,000 years and don't even show up as a blip on the screen for the past 50 million years. Wild weather swings are the norm in our planet's history and we are living in an exceptionally stable climatic period.

While our ancestors were spearing woolly mammoths and painting cave walls, the climate was wobbling wildly. A few centuries of warm, wet, calm climate alternated with a few centuries of cold, dry, windy weather. The climate jumped between cold and warm not over centuries, but in as little as a single year. Often, conditions “flickered” back and forth between cold and warm for a few decades before settling down.

Remember that 1,000 years ago the Vikings were growing grapes in Greenland. Now the area where they lived is too cold to sustain any reasonable amount of agriculture. Perhaps there were some evil proto-Republicans around 1,000 years ago to cause the global cooling.

A really, really inconvenient truth for Gore is that all scientists agree that we're in a period of increased solar activity. The sun, of course, provides all of the heat for earth except the insignificant amount generated by humans. The heat from the sun has increased over the past 100 years and especially over the past 20 years.

According to observations by V. Ramanathan, B. R. Barkstrom, and E. F. Harrison, clouds have a net cooling effect of -17 W/m2 . Svensmark and Friis-Christensen conclude from the diminution of this cooling effect between 1986 and 1990 that the solar irradiance has increased by about 1.5 W/m2 within these three and a half years. A change of this order is quite remarkable, since the total radiative forcing by carbon dioxide accumulated since 1750 has been estimated by the IPCC not to go beyond 1.5 W/m2 . This means that cosmic rays, strongly modulated by solar activity, achieve an effect within three and a half years for which the accumulation of carbon dioxide in the atmosphere needs centuries. This shows clearly to what extent the greenhouse effect has been overestimated in comparison with the solar contribution to climate change, which turns out to be the most important factor.

According to NASA, Mars is experiencing global warming, too:

And for three Mars summers in a row, deposits of frozen carbon dioxide near Mars' south pole have shrunk from the previous year's size, suggesting a climate change in progress.

Not only is our red neighbor heating up, but Neptune's largest moon, Triton, is also experiencing global warming:

The Earth is not alone in suffering global warming. According to observations made by NASA's Hubble Space Telescope and several ground-based instruments, temperatures on Neptune's largest moon have increased dramatically since the Voyager space probe swung by in 1989. So much so, in fact, that Triton's surface of frozen nitrogen is turning into gas, making its thin atmosphere denser by the day.

“At least since 1989, Triton has been undergoing a period of global warming,” confirms astronomer James Elliot, professor of Earth, Atmospheric and Planetary Sciences at Massachusetts Institute of Technology. “Percentage-wise, it's a very large increase.”

There are thousands of references on the Internet about Triton's global warming but Al Gore conveniently omits those truths in his movie.

The latest images could provide evidence that Jupiter is in the midst of a global change that can modify temperatures by as much as 10 degrees Fahrenheit on different parts of the globe.

The global change cycle began when the last of the white oval-shaped storms formed south of the Great Red Spot in 1939.

Finally, Al Gore's movie conveniently omits the fact that water vapor — not carbon dioxide or other man-made compounds — is responsible for about 95% of the greenhouse effect on our planet. The amount of water vapor in the air is controlled by nature and human activity has no effect on water vapor.

Here is a summary of inconvenient truths that Al Gore conveniently fails to mention in his movie. Use these as talking points the next time you talk to someone about global warming:

Global warming is a phony issue cooked up by politicians and scientists with an agenda. I am all for sound environmental policies (I worked in the environmental business for 15 years) but in my work, unlike Democrats and most journalists, I have to deal with facts, not fantasy. We cannot depend on the American mainstream media to give us the facts because most reporters have an agenda and are willing to accept whatever the Democrats say without checking their statements for accuracy.

Posted by Jeff Wefferson at 4:33 PM