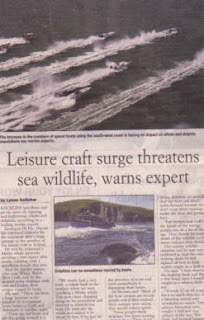 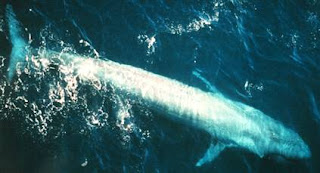 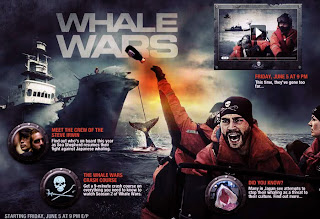 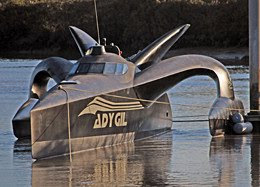 Earthrace/Ady Gil skipper Pete Bethune says that the boat is so loud that the crew would be deafened if they didn't wear ear-plugs....'One passenger likened the deafening din of the engines reverberating around the carbon-fibre cabin to standing by the speakers at a Led Zeppelin concert.'"

As I see it, Sea Shepherd's main function has become entertainment and being tv celebrities; 'saving the whales' is now secondary, but it's their "ticket to success." If helping whales was their primary concern, why on Earth...or any other planet...would they invite a monstrous SPEED BOAT like something out of Batman to join them in the Antarctica whale sanctuary? The boat's purpose is to go as fast as possible for as long as possible; the captain himself, kiwi Pete Bethune says that the boat is so loud that the crew would be deafened if they didn't wear ear-plugs.

WHAT WILL IT SOUND LIKE TO THE WHALES...WHO ARE ALREADY UNDER ATTACK FROM NOISE POLLUTION FROM MANY SOURCES? SOUND TRAVELS MUCH FASTER AND WITH GREATER INTENSITY IN WATER THAN IN AIR. AND SOUND IS THE WHALES' PRIMARY MODE OF INFORMATION EXCHANGE.

"For all its sleek looks, it was only when the engines started up that you realised the raw power of Earthrace. And the noise. One passenger likened the deafening din of the engines reverberating around the carbon-fibre cabin to standing by the speakers at a Led Zeppelin concert."

AND THIS...in Guatemala the Earthrace hit a fishing boat, killed a fisherman, then hired 'high-powered lawyers' to take care of it, and then was 'experiencing hostilities' in Guatemala!

"It’s a good thing for Watson Bethune is rich enough to avoid prosecution. I wonder how much it cost to kill someone in Guatemala while questing for a world speed record? You can see how broke up Bethune is over the death he didn’t even mention his victims by name they were just generic faceless “guys” to him...Yes hiring “High Power” lawyers to fight the victims you killed and injured is the compassionate thing to do. I sure am glad the crew was fine they might have mounted a credible legal challenge against Bethune unlike some poor local fishermen working to survive."

Shutting down whalers is of course admirable, and I used to be Sea Shepherd's biggest fan...until I started looking a little deeper into the reality of what is going on. Having been involved in dolphin research myself, and being a big whale-lover myself for decades, I realized that Sea Shepherd, whose purpose is "defending ocean wildlife and habitats worldwide", seemed to be avoiding the REAL global threats to the cetaceans while focusing on "giving the media what it wants." Capt. Paul Watson himself says that this is their strategy, in lieu of creating any media of their own, which was the approach taken by Sir Peter Blake, kiwi yachtee turned environmental activist killed in the Amazon. After meeting Watson and top Sea Shepherd people in Belgium last year, I had a few questions, for example, why does Sea Shepherd never even talk about global threats to ALL whales like marine toxicity, marine noise pollution, and U.S. Navy's LFA-sonar, that explodes their inner-ear? Sure, the Jap whalers are an atrocity...but whaling only affects a tiny number of the whale populations. Finally Rosalind Peterson was able to verbalize what I'd been thinking:

"The new motto of most environmental groups is even when an environmental disaster is eminent. Money has overridden ethics for many of these groups. Another environmental group motto, which has been around for years: "…thus ensuring that money is raised, without generating too much controversy, for their corporate headquarters."

This pretty much sums it up for Watson and crew: they are in fact "really trying to stop the Japanese whalers"...BUT they never even mention the GLOBAL threats to whales; their self-stated "obsession" with stopping the whalers has been replaced by their obsession with being tv stars; and, now, in true Orwellian fashion, they have invited a BATMAN NOISE MACHINE to join them in the Antarctica whale sanctuary! Why? Because it MAKES GREAT TELEVISION! Ratings are where it's at..."just go to the instant donor button on our web-site!"

"Australian National University marketing lecturer Andrew Hughes said it was not just awareness Sea Shepherd had created. The organisation was generating "a lot of money" by linking its powerful images, blog updates, and promise of instant action to online donations."

When you realize that Sea Shepherd apparently owns over $100,000 in Exxon/Mobile (formerly Rockefeller's Standard Oil)...see link below:

...and that Discovery Communications also hosts the Military Channel...the picture is becoming all too clear. Mainstream media. TV stars! Big Money pouring in! "Eco"-speed boats there to...what was that again? Oh, yeah...save the whales!

Right! If Sea Shepherd and Earthrace REALLY cared more about the whales than about "making great television" there's NO WAY that they'd bring a 'wavepiercing' noise-generator into the Southern Ocean. At those speeds, how would they know if THEY hit a whale? It's just like the situation we encountered in Shark Bay WA a few months ago. We went on a 'whale-watching' excursion thinking it was going to be on a sailboat, but it turned out to be a military-style speed boat. Excessive speed made us all feel endangered, not to mention the marine life, who could barely get out of the way! We told the owner/operator that he shouldn't be allowed to operate in a World Heritage area teeming with life. We asked him if he'd ever hit anything. "Not that I know of" was his response. Only later we learned that a few months before, he had hit and killed a snorkeler...AND DIDN'T EVEN KNOW IT until the tourists told him to stop! And he's still in operation! Conccerning Earthrace being an 'eco' boat...this is just as Orwellian as the Shark Bay "Aquarush" being 'eco'...it's just a marketing gimmick. The Earthrace may run on B100 biofuel, but since when is 'biofuel' any less damaging than fossil fuels? Read up on the real ecological cost of "biofuels."

Read this interview with Dr. Vandana Shiva on how the production of "biofuels" is literally taking food out of the mouths of millions of malnourished third-world people.

Two Earthrace crew members even underwent liposuction and had the fat from their own bodies mixed in with the fuel...JUST AS A PUBLICITY STUNT! Many clear thinkers on the global energy scenario have observed that new cheap, renewable and readily-available energy sources are at this point in time THE WORST THING THAT COULD HAPPEN...because look at what we are doing with it?

Maybe soon we'll Sea Shepherd enshrined as an official branch of the UN and going around with biofuel-powered "green" tanks to enforce bio-region mandates? Pardon me, folks, but am I missing something here? It's the WHALES I am interested in, NOT Paul Watson, the Sea Shepherd celebs, Peter Bethune, the Earthrace celebs, nor Discovery Communications, Animal Planet and the Military Channel!