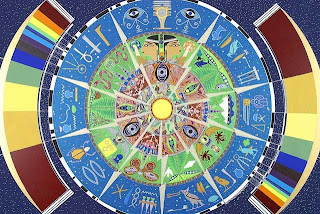 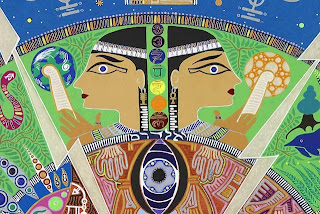 This painting is very much in the spirit not only of ancient indigenous “civilization” – where people lived together in natural harmony in loosely-organized but organically connected tribal groups, enjoying the support and cooperation of their fellow beings, without the imposition of nation-state agendas – but also of future indigenous civilizations, which we are now creating.
Lemuria, or Mu, may have been such a place.  The story goes that she was a large island continent in the southern Pacific ocean which sank into the depths of the sea some 20-odd thousand years ago.
Mainstream archaeologists and geoscientists  tend to discount her existence;  but who can really know?  These minds do acknowledge evidence of homo sapiens going back hundreds of thousands of years;  cultures of advanced indigenous peoples could easily have existed in areas now unexplorable.  Moreover, an indigenous “civilization” would not have left the Godzilla foot-print that our parasitic world-machine has bequeathed.
Some researchers say that the ancient Egypt we know was merely the tail-end or remnant of a much vaster and greater civilization, where the “mother tongue” was spoken, a language from which the “ancient harmonic languages” (Chinese, Egyptian, Hebrew, Sanskrit, and Tibetan) may have evolved.  The people of this culture would have been highly-evolved spiritually and psychologically, but not nearly as materialistic as we are.  Maybe they were like the Mayans, the native Americans, the Tibetans, the indigenous Australians?  Perhaps they had extremely advanced forms of music and uses of sound and vibrational healing, of artistic creativity, of telepathy, of astronomical knowledge, shamanic exploration,  and of the “musics of the spheres.”
Who knows?  But this painting is dedicated to them, and to all indigenous artists, musicians, and shamanic visionaries of all times, dimensions, and species.
This painting is a mandala approximately 1.5 by 2.5 meters, done with acrylic and corrction pen on custom board.
It contains symbols from seven different ancient cultures, primarily Egyptian hieroglyphs.  The others are Tibetan, Sanskrit, Hebrew, Chinese, Anasazi, and Mayan.
The solar disc in the center represents, of course, the sun.  To the ancients, the sun was not worshipped at the chief deity but was viewed as a symbol thereof.  Emanating from the solar disc are nine bolts of star-lightning.  These may also represent the nine original emanations of Ra.
The main body of the Egyptian hieroglyphics in the painting, running counter-clockwise from 8:00 to 4:00, means “transforming star-lightning awareness into sunrise-love.”
The sun, or Ahau to the Mayans (represented by the yellow face also at 8:00) is the guardian over passages in cycles of time, and is also a chakra within a galactic being, transducing evolutionary energies directly from the hunab ku (Mayan for the center of the galaxy).
According to the Mayan and Egyptian calendars, we are now in the “beak of time”, a “window” or a “sacred moment in time” which occurs once every 26,000 years;  at this time the winter solstice point of our sun’s position in the sky gradually aligns with the hunab ku, the galactic center in Sagitarrius.  During this window transformative consciousness streams into us via the sun and assists in our creation of and ascension to a higher-dimensional reality continuum!
At the top is the centrel symbol of Egyptian spirituality, the Djed pillar, Osiris’s backbone and symbol of regeneration and cosmic stability and harmony.  Within the upraised Djed is the Chinese symbol “yung” meaning “eternity.”  To either side of the Djed pillar is the Eye of Horus, or Uadjat, representing divine guidance and protection.  These uadjats are painted in their androgynous manifestations.
Counterclockwise, the next grouping of symbols means “inspiration” or literally “light-life moving within.”  The next grouping translates as “place of origin” “instantly “ or “ here and now.”
Then beginning at 4:00 we have three glyphs;  the triangle with star and semi-circle is “Ast”, ancient name for Sirius/Isis.  Beside it is “tiet”, a bow which is another name for Isis.  Above these is “sia”, meaning “intelligence of the heart.”
Finally, the glyph in the next region is “atchaas”, or “primeval wisdom.”
In Egyptian, the entire band of hieroglyphics would read

In English, this would mean “Djed be raised, divine guidance and inspiration, originating here and now, transforming star-lightning awareness into sun-rise-love, Isis, intelligence of the heart, primeval wisdom, giving guidance and protection.”
The two faces represent Ma’at on the left, the goddess of and archetype of truth, justice and cosmic harmony;  and on the right, Isis, goddess of life and magic.  In their hands they hold an ostrich feather (“shut”), which is the symbol of truth.  In the afterlife of Egyptian mythology, the soul comes to judgment after a journey through the duat, or netherworld.  The heart of each person is weighed on the scales of Ma’at, or truth, balanced against the weight of her feather.  If the balance was unfavourable, the soul was thrown to Ammat, a cross between a lion, a hippopotamus and a crocodile, and was devoured, never to return.  If the balance was favourable, the soul entered a real of eternal paradise according to their nature and Osiris’ guidance.
The four “dot-eclipse” motifs in the corners represent the four GREAT FORCES of the universe, the four pillars of creation.  The two colored areas are dual rainbow spectra (the chromatic components of visible light), symbols of celestial beauty and peace, and the bridge to the higher kingdoms.
The painting is a mandala, which is a universal and cosmic centerpoint and symbol of the “self.”  It is the still-point singularity from which consciousness and creativity emanate.
The patterns inside the inner circles, just outside the solar disc, are what I call “mullum-keringke glyphs.”  This is a new style of painting which started coming through when I first came to Australia. I think of it as “the electrical circuitry of plants” or “the optical characteristics of DNA,” maybe an “organic higher-light language.”  I call them “mullum-keringke” because I was near Mullumbimby NSW when they first came through, and their first fully manifested appearance was on a set of rocks which I sent to my aboriginal art-sisters of the Keringke group near Alice Springs NT.
This “mullum-keringke” domain could also represent the consciousness of solar energy as it interfaces with DNA to create “spectraglyphs” expressing the “breath of Ahau” as it gives life to and revivifies life on Earth.
The next ring out shows a stepping down of these energies into visible light frequencies, and their utilization in vision by the animal kingdom and in photosynthesis by the plant kingdom.
These glyph continua may also relate to morphogenetic chakra fields (MGCF’s), creating cross-species/kingdom resonances amplifying the heart-chakra life-force energy spectrum.
The third ring is the domain of the biophysical, the Earth, Gaia, and her myriad species of florae and faunae, geographies, climates and ecosystems.
The solar disc may also represent the plasma core of the Earth, receiving transmissions from Ahau, then sending the energies out through the Earth-continuua, through the different octaves of local space-time, harmonizing and recalibrating each domain to optimum holonomic `synchronization, purifying the Earth, cleansing her ecosystems, healing her life-forms and clearing the noosphere of conflict and karmic residue.
The outer blue band contains the hieroglyphics – floating in the ocean of space, the atmostphere of clarity and transcendence – protecting the Earth in a womb of love, representing new constellations of ascension in a true kingdom of heaven. S’aha Djed.

Jose Arguelles, Time and the Technosphere;  Earth Ascending
James Churchward, The Lost Continent of Mu
Graham Hancock, Mirror in the Sky and The Orion Mystery
Carl Jung, Man and his Symbols
Moira Timms, “Raising the Djed” and  Beyond Prophecies and Predictions

Thanks to Moira Timms for hieroglyphic translation assistance 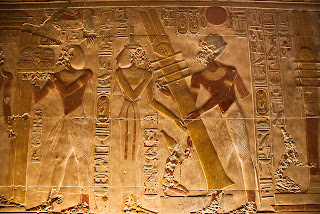 see "The Raising of the Djed:  Re-membering the Centre", Moira Timms
http://alignment2012.com/djed.html
Posted by Jeff Wefferson at 1:37 PM