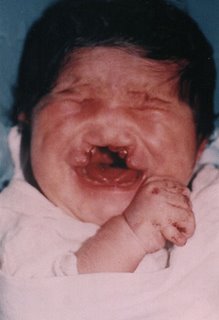 "By continuing to use depleted uranium (DU) armor and munitions, the Bush Pentagon is waging radiological warfare against the unborn and indeed against all unborn generations...By now most people know that DU has damaged tens of thousands of our own troops and caused soaring cancer rates in target populations, including the people of Iraq, Kosovo, and Afghanistan...What is less well known is the staggering rate of birth defects in the children of the veterans of these wars. The British are reporting rates as high as 65%. It seems that breathing in the radioactive dust from exploded DU shells not only causes decapacitating illnesses, but massive genetic damage as well."

NOTE FROM JEFF: THE "CHOSEN PEOPLE" HAVE OBVIOUSLY BEEN CHOSEN BY THEIR "GOD" TO LAUNCH WORLD WAR 3 AND SPREAD RADIATION ALL OVER THE PLANET TO FULFILL THEIR PSYCHOTIC "ARMAGEDDON" PROPHECY...AND WE ARE JUST WATCHING ON TV ABOUT HOW THE "EVIL" MUSLIMS DESERVE IT!!!!!!! IT'S NOTHING SHORT OF PLANETARY GENOCIDE AND HUMAN SUICIDE.

PEOPLE...THIS IS FOR REAL I AM AFRAID.

"Not working to discover the truth and not forming reasoned opinions about what's happening in the world is a way of being complicit in the new totalitarianism." Dr. Norman Livergood

Click on the link below to see what ionizing radiation does to babies. This is OUR future...EVERYONES'.

The delivery of at least 100 GBU 28 bunker busters bombs containing depleted uranium warheads by the United States to Israel for use against targets in Lebanon will result in additional radioactive and chemical toxic contamination with consequent adverse health and environmental effects throughout the Middle East. Israeli tank gunners are also using depleted uranium tank rounds as photographs verify.

Today, U.S., British, and now Israeli military personnel are using illegal
uranium munitions - America's and England's own "dirty bombs" while U.S. Army,
U.S. Department of Energy, U.S. Department of Defense, and British Ministry of
Defence officials deny that there are any adverse health and environmental
effects as a consequence of the manufacture, testing, and/or use of uranium
munitions, to avoid liability for the willful and illegal dispersal of a
radioactive toxic material - depleted uranium.

The use of uranium weapons is absolutely unacceptable, and a crime against
humanity. Consequently, the citizens of the world and all governments must force cessation of uranium weapons use. I must demand that Israel now provide medical care to all DU casualties in Lebanon and clean up all DU contamination.

(2) "Procedures to minimize the spread of radioactivity will be implemented as
soon as possible."

(3) "Radioactive material and waste will not be locally disposed of through burial, submersion, incineration, destruction in place, or abandonment" and

(4) "All equipment, to include captured or combat RCE, will be surveyed,
packaged, retrograded, decontaminated and released IAW Technical Bulletin
9-1300-278, DA PAM 700-48" (Note: Maximum exposure limits are specified in
Appendix F).

The previous and current use of uranium weapons, the release of radioactive
components in destroyed U.S. and foreign military equipment and releases of
industrial, medical, research facility radioactive materials have resulted in
unacceptable exposures. Therefore, decontamination must be completed, as
required by U.S. Army Regulation 700-48 and should include releases of all
radioactive materials resulting from military operations.

The extent of adverse health and environmental effects of uranium weapons
contamination is not limited to combat zones but includes facilities and sites
where uranium weapons were manufactured or tested including Vieques, Puerto
Rico; Colonie, New York; Concord, MA; Jefferson Proving Grounds, Indiana; and
Schofield Barracks, Hawaii. Therefore medical care must be provided by the
United States Department of Defense officials to all individuals affected by the
manufacturing, testing, and/or use of uranium munitions. Thorough environmental
remediation also must be completed without further delay.

I am amazed that fifteen years after I was asked to clean up the initial DU mess
from Gulf War 1 and over ten years since I finished the depleted uranium
project, that United States Department of Defense officials and others still
attempt to justify uranium munitions use while ignoring mandatory requirements.

I am dismayed that Department of Defense and Department of Energy officials and representatives continue personal attacks aimed to silence or discredit those of us who are demanding that medical care be provided to all DU casualties and that environmental remediation is completed in compliance with U.S. Army Regulation 700-48. But beyond the ignored mandatory actions, the willful dispersal of tons of solid radioactive and chemically toxic waste in the form of uranium munitions is illegal (http://www.traprockpeace.org/karen_parker_du_illegality.pdf ) and just does not even pass the common sense test and according to the U.S. Department of Homeland Security, DHS, is a dirty bomb. DHS issued "dirty bomb"
response guidelines, http://www.access.gpo.gov/su_docs/aces/fr-cont.html
on January 3, 2006 for incidents within the United States but ignore DOD use
of uranium weapons and existing DOD regulations.

These guidelines specifically state that: "Characteristics of RDD and IND
Incidents: A radiological incident is defined as an event or series of events,
deliberate or accidental, leading to the release, or potential release, into the
environment of radioactive material in sufficient quantity to warrant
consideration of protective actions. Use of an RDD or IND is an act of terror
that produces a radiological incident."

Thus the use of uranium munitions is "an act or terror" as defined by DHS.

Finally, continued compliance with the infamous March 1991 Los Alamos Memorandum that was issued to ensure continued use of uranium munitions can not be justified.

In conclusion: the President of the United States - George W. Bush, the Prime
Minister of Great Britain - Tony Blair, and the Prime Minister of Israel - Ehud
Olmert must acknowledge and accept responsibility for willful use of illegal
uranium munitions - their own "dirty bombs" - resulting in adverse health and
environmental effects.

President Bush, Prime Minister Blair, and Prime Minister Olmert should order:
1. medical care for all casualties,
2. thorough environmental remediation,
3. immediate cessation of retaliation against all of us who demand compliance
with medical care and environmental remediation requirements,
4. and stop the already illegal the use (UN finding) of depleted uranium
munitions.

References- these references are copies of the actual regulations and orders and
other pertinent official documents: