IT'S A HAPPY FAMILY OF "TERRORISTS"!!! 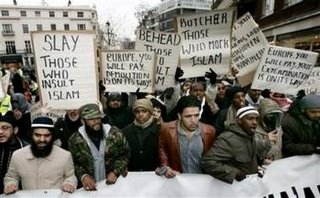 Notice it appears to be the SAME HAND-WRITING on all these signs. As if someone made them, then said "Hey buddy, I'll give you 20 quid to put this table-cloth on your head and hold this sign while we take your picture." "Slay"? "Behead"? "Butchaa"? These don't sound like words that a typical English-speaking person would use if they were pissed off. It would sound a lot angrier and more violent, wouldn't it? These are CATCH-WORDS; "butchaa" is for the younger 'gansta' crowd!!!
Posted by Jeff Wefferson at 1:52 PM 2 comments: 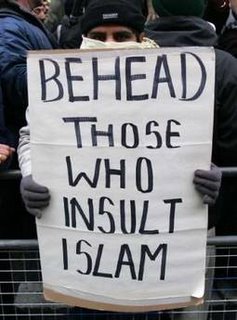 COME ON PEOPLE...all these words are just psy-ops catch words...this one is to tie in your memory to the fake "beheading" by the fake "terrorists" you could see all over the internet a couple years ago. This English is a bit formal sounding for "terrorists", isn't it? Actually, it sounds like a commandment out of a CIA operations manual.
Posted by Jeff Wefferson at 1:48 PM No comments: 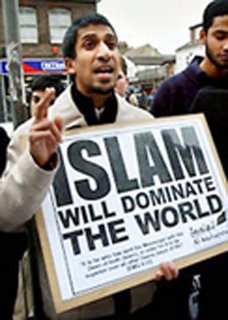 Doesn't this guy look just like he was working down at the shoe store at Piccadilly Square only a few hours before? And can you imagine this guy using the word "dominate"? If you were a genuinely pissed-off Muslim who spoke English, would YOU use these words on a sign? I don't think so. Notice the same finger-gesture they always showed "ben Laden" doing...I think he just dropped his cigarette!
Posted by Jeff Wefferson at 1:45 PM No comments:

THIS IS THE MOST BLATANTLY BOGUS ONE! 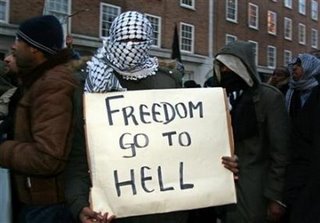 "FREEDOM GO TO HELL." Honestly, who would ever use words like that except as a joke or a hoax. "Freedom"? Does ANYONE actually believe that ANYONE in "other" countries thinks that they are NOT "free"...and that "we" are "free"? "Freedom" and "democracy" are nothing more than highly repeated Orwellian catch-words. VERY STUPID.
Posted by Jeff Wefferson at 1:38 PM No comments: 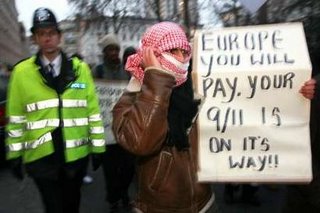 ISN'T THAT A TABLE-CLOTH? And wait, isn't England part of Europe...they already had "7/7", right? Don't these people live in London...shouldn't the "your" be "our"?
Posted by Jeff Wefferson at 1:33 PM No comments:

THE "ANGRY MUSLIMS" WITH THE SIGNS ARE CIA EMPLOYEES!!!

Posted by Jeff Wefferson at 1:20 PM No comments: