"WHO ARE THE CETACEANS?" JEFF PHILLIPS 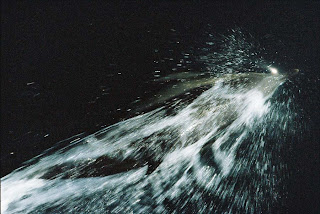 The cetaceans are more than just large-brained mammals who live in the ocean, breathe air and give birth to their young; they are more than "highly intelligent" animals with complex social systems and sophisticated uses of sound like echo-location and communication. They are even more than the "people of the sea", which is how the ancient Lemurians referred to them, humans being the "people of the land."
A few years ago I was talking with musician Ralph Towner about doing live musical dialogues with whales from boats and beaming it into space via radio-telescope. He thought the project was interesting, but his immediate comment was that "we should really leave those people alone."

To me, the cetaceans as a whole possess not only the full spectrum of attributes which humans have traditionally reserved exclusively for ourselves, including self-awareness, but beyond these they show through the example of how they live an "intelligence" more highly-evolved than that of "man, the wise."

The cetaceans, for example, are far more perfectly adapted to their environment than we are ours; and they live in the sea, which not only covers 70% of the Earth's surface and enables relative freedom from gravity as well as self-locomotion in three dimensions, but is also a much more stable environment than land and provides protection during periods of cosmic energy bombardment.

We don't really know all that much about their inner experience mainly because we haven't bridged the physical communication barrier, but I think that it is likely that they are capable of all endeavours that indigenous humans participate in, for example, advanced knowledge of astronomy and cycles of time, knowledge of the sun and planets, mapping the ocean and sky, knowledge of plants and foods, oral histories shared from memory, spiritual psychologies, a sense of the sacred in their lives, and music.

They are gifted with "internal technologies" much the same as we have been; yet I believe they have developed theirs much more fully than we have, as we have been distracted by a full spectrum of external hardware and extra-somatic artifacts which seem ultimately to be our down-fall.

Our most highly advanced external technologies are used in the service of killing; not only do cetaceans not kill members of their own species, they show a profound deference for "man, the wise" even in the face of repeated abuse on our part. Dolphins have been known to go to great lengths to assist humans in distress; and Capt. Paul Watson's (a founder of Greenpeace and currently Sea Shepherd) life was changed from momentary eye-contact with a breaching cachelot who was about to crush his dingy and then rolled to spare him.

Greek naturalist Pliny the Elder said he believed that dolphins were capable of something that even humanity had not attained: "friendship for no advantage."

The cetaceans have been on the same planet as us, with neurobiological systems more highly evolved than ours, for tens of millions of years. "Man, the wise" only came to be about a million years ago. That they live in tune with the Earth is an understatement.

I think we are living on their planet. "Man, the wise" is wreaking catastrophe upon catastrophe not only on the cetaceans, but on the Earth as a whole. We are destroying in years what Mother Nature has taken billions of years to create and bring to fruition.

That we do not recognize the cetaceans as fellow beings is a testament to our blindness, our unwillingness to open our hearts and minds to who they really are.
I do not think that humanity is innately dysfunctional; but in our present condition of amplified koyaanisqatsi, we as a whole are no longer "people" but have become the HSMV, or "homo sapiens macro virus."

I think that the word "people" should be reserved for those who act like real people�and in the homo sapiens population, these are few and far between!
The cetaceans are the REAL PEOPLE of planet Earth!!!

John Lilly believed that if we couldn't even learn to communicate with fellow intelligences possessing similar neurobiology and living on the same planet, there was no way we could hope to communicate with beings from other worlds.
If the remnant of "real people" in the human population got together and made a huge effort to reach out to the cetaceans and attempted a quantum leap in our abilities truly to understand and communicate, we might actually become more than we have ever been...not only "real" people but for the first time, the actual "crew" of Spaceship Earth!

Hi Jeff, I am xandra and apparently you met a friend of mine, Michael Kirk-Smith, in Wexford a few days ago. He emailed me the URL for your blog... Can you tell me the purpose of this blog?

You can see/hear me on www.myspace.com/xandrasong